The Popcycle of James Joyce 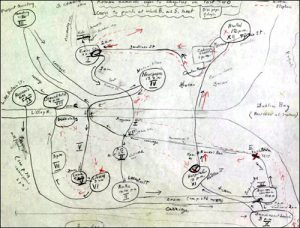 History (School, Community): Young Joyce’s imagination was captured by the cause of Irish freedom, whose most prominent spokesman at the time was Charles Stewart Parnell, a national hero who suffered a tragic fall. “He was accused of adultery in the divorce suit of Captain O’Shea. At first it appeared that Parnell might weather this scandal, but a coalition of political enemies and devout Catholics ousted him from leadership of the Irish Parliamentary Party, and the rural population of Ireland turned against their hero with savage hatred” (Litz, 1972: 20). At Parnell’s funeral crowds tore to shreds the case in which the man’s coffin had been shipped in order to have a relic. Soon he became in the Irish imagination the type of the betrayed hero (21).

Church (Religion): Joyce’s formal education took place in schools run by the Jesuit order. His mot important religious experience occurred at Belvedere College, “when he was elected Prefect of the Sodality, “that is, “head of a group of students who banded together for the purposes of devotion and mutual help.” It was his duty according to the Jesuit manual “to excel the other members of the Sodality in virtue and to observe with the greatest diligence not only the rules of his own office but also the common rules, those especially that relate to the frequentation of the sacraments, confessing his sins and receiving the Blessed Eucharist more frequently than the others, and he should take care to advance the Sodality in the way of virtue and Christian perfection, more by example even than by words (28). Although Joyce broke with the Church, as Litz observed, this stance carried over to his “view of the artist as secular priest.”

Family (Paleo): The defining problem of Home for Joyce was his ambivalence toward his father, whose chief interst in life was “jolification.” “The declining family fortune had the greatest impact on James. The inefficiency of Joyce’s father and his wasteful habits gradually undermined family finances and family solidarity. When James entered the fashionable Clongowes Wood College in 1888, his family was quite well-to-do; by the time he had reached Belvedere College, five years later, his father had been dismissed from the Rates office on a small pension. The family had now begun a long series of removals to heaper dwellings” (919). 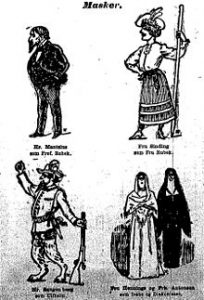 Career: At age eighteen Joyce published a refiew of Ibsen’s play, “When We Dead Awaken” in The Fortnightly Review. In a letter he sent to Ibsen, the student Joyce explained that while he promoted the dramatist’s work at every opportunity, he kept to himself the most important reasons for his admiration. “I did not say how what I could discern dimly of your life was my pride to see, how your battles inspired me–not the obvious material battle but those that were fought and won behind your forehead–how your willful resolution to wrest the secret from life gave me heart and how in your absolute indifference to public canons of art friends and shibboleths you walked in the light of your inward heroism” (Joyce, in Litz, 24).

Mystory: These entries constitute a preliminary survey of Joyce’s popcyle, points of identification, both positive and negative, attraction and repulsion, by which Joyce oriented himself his existence: Parnell, Christ, Joyce’s father, Ibsen: together they constitute Joyce’s inner Board of Directors (superego).Even in these brief descriptions themata are evident, perhaps summarized in the completed sentence of Ibsen’s title: “When we dead awaken, we will see that we have never lived.” The Jesuit organization for boys, the Sodality, set the highest standards piety an virtue for lay people, perhaps too high: Parnell, Joyce’s father, the characters in the play, could not live up to them.

The image is a map drawn by Nabokov of the intertwining paths of Leopold Bloom and Stephen Daedalus around Dublin recounted in the novel, Ulysses.

Mystory. The Wide Image posts reviewed examples of completed careers in which it is possible to recognize the signature of a childhood primal scene of memory. The function of mystory is to discover and design one’s wide image at the beginning of a career, and we will review some careers in which the mystory levels are legible, as relays for composing our own version. The premise of mystory is that disposition is shaped into identity (selfhood, subject) uniquely for each individual during upbringing (ideological interpellation) within a specific habitus of four institutions before entering into career:  Family, Church, School, Entertainment. These institutions form a popcycle –the name referring to the circulation of culture across levels, a matrix or system we will explore in detail in KE. Mystory is composed by documenting the scene of interpellation in each of the institutions, using memory and research to register how one became positioned or placed (how one was “called”) relative to the ideological configuration of that institution. The assumption is that identity is not given in nature, but is formed within specific ideology. Ideology names those categories of dominant/subordinant behaviors and attitudes whose shorthand tag is WASP (in Western society). The conventional preferred identity status until recently was White race, Anglo-Saxon ethnicity, Protestant religion, continuing through the inventory to Heterosexual (sexuality) Bourgeois (class) Male (gender). These preferences and categories are breaking down now, manifested in intensely contested policy debates. Identity formation is one of the three fundamental areas of apparatus invention, so one of the concerns of konsult is to engage with new identity behaviors emerging in electracy. 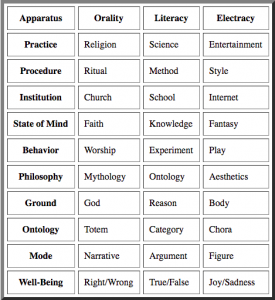 –Popcycle. The popcycle is structured as an isotopy of microcosm and macrocosm, manifesting an homology of correspondences relating individual faculties (faculty psychology remains relevant in pedagogy) with institutions and even apparati. Understanding of this civilizational recapitulation (ontogeny repeating phylogeny) is one key to egent capability put to work in konsult. By the time egents reach college they have become natives of all four apparati: born into a family and hence a native language  (Paleolithic institution, the Paleo apparatus); introduced to Orality through religion, learning ethics (right and wrong behavior) whether directly in the institution of church, synagogue, mosque, or indirectly through popular culture; Literacy is acquired in school, including enculturation into the history and values of a community (a nation); simultaneously with these three interpellations, children encounter Electracy in their consumption of media. Two points must be noted: these institutions are prostheses and collective projections of the intellectual virtues or powers of individuals: Language plus Theoria (Knowing institutionalized in Literacy), Praxis (Willing institutionalized in Orality), Poiesis (Imagining institutionalized in Electracy): theopraxesis. The second point is that at the collective level these institutions are at odds, in opposition and conflict with one another. A challenge for konsult is to invent theopraxesis not only as a skill-set of individuals but also of civilizations.