It is useful to keep in mind several keywords naming the conceptual foundation of Konsult Experiment. 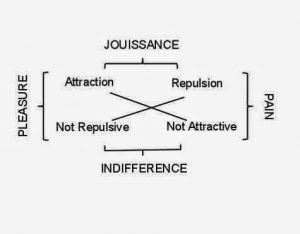 Electracy, like literacy and orality before it, is an apparatus, meaning that it is a social machine (part technological, part ideological, part metaphysical). An analogy with the invention of literacy guides our experimental approach to electracy. The Classical Greeks invented alphabetic writing (the vowel, signs recording the spoken word, the material support for inscription); school and its practices (the Academy, the Lyceum, in which were invented the categories, method, concept, logic — in short: science); individual and collective identity behaviors (selfhood, democratic state).

The question pursued here is: what are the electrate equivalents of the literate institutional practices and identity formations? Despite all the explicit statements made by leading commentators rejecting technological determinism, much of the best theorizing of new media and digital technology in general today neglects the insights of “apparatus”: that the Internet is an emerging institution that is to electracy what school was to literacy; that the categorial, logical, and rhetorical practices needed to function natively in this institution have to be invented, and moreover that the invention of an image metaphysics (the equivalent of what Aristotle accomplished for the written word) has its own invention stream, independent of the features of modern recording equipment.

A shorthand version of what we seek in this blog is the electrate equivalent of essence. literate category formation (aka metaphysics) functions by means of definitional determination of essence (that without which a thing may not be what it is). This categorial operator was used to organize every aspect of literate civilization, including the social construction of identity in terms of essences. The movement away from essential identities in contemporary culture is not due to some emancipatory poltics; or rather, emancipatory politics, breaking free from eseentialism, is a symptom of the mutation in the apparatus, from alphabetic metaphysics to image metaphysics.

Konsult supports thinking from the position of event, rather than from the position of subject/object, the prototype of the latter being that of the Cartesian cogito (konsult supplements cogito with event).  “The concept is obviously  knowledge–but knowledge of itself, and what it knows is the pure event, which must not be confused with the state of affairs in which it is embodied.  The task of philosophy when it creates concepts, entities, is always to extract an event from things and beings, to set up the new event from things and beings, always to give them a new event: space, time, matter, thought, the possible as events” (What Is Philosophy?).

The thought of event is that of a collective, a group that is not one but multitude.  The imperative to construct this capability come from Paul Virilio, his description of the society of the spectacle as a dromosphere, a condition of dimension collapse due to our light-speed technologies.  The Internet (General) Accident is one that happens everywhere simultaneously, as a possibility of an information economy.  Virilio warns that the dromosphere (dimension collapse due to speed) reduces time to Now, disjoined from t/here.  In such conditions the established rubrics of rhetoric (practical reason, the logical means of ethics and politics, of decision) are made problematic, to the extent that they concern one or the other dimension of time:  Forensic (determine what was true in the past); Epideictic (praise or blame in the present); Deliberative (decide on a future action).  Prudence is a time-image, a wisdom of temporality gathering up the three orders of time into an act of judgment.

Electracy requires the introduction of a fourth order of rhetoric, capable of ethical and political reasoning Now, in the Moment (Augenblick).  In Heuretics the practice of event reasoning is developed as flash reason.  “Event” names this fourth order, as an invitation for further invention (the construction of concepts enabling this collective rhetoric).  Forensic, Epideictic, Deliberative, Eventive. 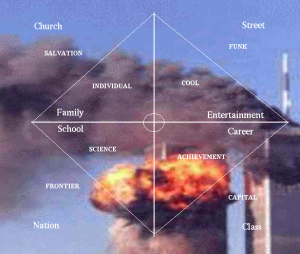 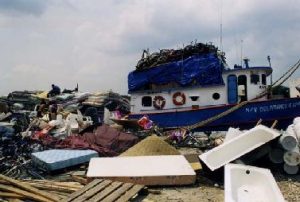 Choragraphy is generated by updating the historical term chorography to include Jacques Derrida’s reading of chora (khora) in Plato’s Timaeus. In his collaboration with the architect Peter Eisenman on the design of a folie for the Parc de la Villette in Paris, Derrida proposed chora as the idea (parti pris). In Heuretics, Ulmer generated choragraphy using a CATTt in which the Derrida/Eisenman folie served as Theory. The hypothesis was that chora is to electracy what Aristotle’s topos was to literacy. GPS is topical: EPS (Existential Positioning System) is choral.

Konsult correlates existential experience with everyday life materiality.  For an environment to be intelligent, the apparatus needs to manage not only physical location (GPS), but EPS, which requires tracking not only presence but absence (differance).  If conventional wayfinding gives coordinates that say “You Are Here,” Existential coordinates engage a more complex orientation:  You think where you are not, and are not where you think (Lacan).  A Visit is an event of encounter between egents and places, both of which involve dimensions that are not phenomenal, not present, without presence and not presentable.  Thoreau’s Walden concludes with a figure that provides an emblem for EPS:  What was the meaning of that South-Sea Exploring Expedition, with all its parade and expense, but an indirect recognition of the fact that there are continents and seas in the moral world to which every man is an isthmus or an inlet, yet unexplored by him, but that it is easier to sail many thousand miles through cold and storm and cannibals, in a government ship, with five hundred men and boys to assist one, than it is to explore the private sea, the Atlantic and Pacific Ocean of one’s being alone.  Choragraphy as ontological mapping takes up this question of coordinating material and spiritual wayfinding, exploring the shifting borders and thresholds between inner and outer identity formations.

Thoreau’s passage is emblematic because it uses global exploration and mapping as a metaphor for self-knowledge (the kind of knowledge and the mode of expression within the cognitive jurisdiction of Arts & Letters disciplines informing EmerAgency consulting on Well-Being).  The challenge of EPS choragraphy is that the spacetime for which it is responsible is a second-order construction, figurative rather than literal, emerging through aesthetic formal manipuation of media.  But the promise of ubimage is to create an interface convergence of literal and figurative dimensions of human experience.  Clive James’s explanation gives an idea of the nature of figuration that renders intelligible the nonphenomenal dimension absent from all maps.

Any poem that does not just slide past us like all those thousands of others usually has an ignition point for our attention.  To take the most startling possible example, think of “Spring,” by Gerard Manley Hopkins.  Everyone knows the first line because everyone know the poem.  “Nothing is so beautiful as Spring” is a line that hundreds of poets could have written, and was probably designed to sound that way. Only two lines further on, however, we get “Thrush’s eggs look little low heavens” and we are electrified. Eventually we see that the complete poem is fitting in its every part, for its task of living up to the standards of thought and perception set by that single flash  of illumination. But we wouldn’t even be checking up if we had not been put on the alert by a lightning strike of an idea that goes beyond thought and perception and into the area of metaphorical transformation that a poem demands.  A poem … is dependent on this ability to project you into a reality so drastically rearranged that it makes your hair fizz even when it looks exactly like itself.  (Clive James, “Little Low Heavens,” Poetry, Sept. 2008).

Two aspects of James’s description are worth noting in our context:  the figure of electrification and the lightning strike of an image, resonant with electracy and flash reason; that the version of reality made receivable through aesthetic indirection is — like Plato’s chora — beyond both thought and perception.  This point must be kept in mind, in  the context of ubimage, given the (legitimate) resurgence of interest in phenomenology by commentators on pervasive computing, who (rashly) ignore the critique of phenomenology motivating most of French poststructuralist philosophy, not to mention deconstruction.