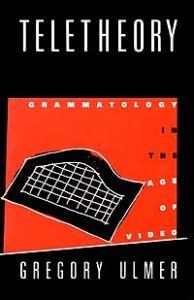 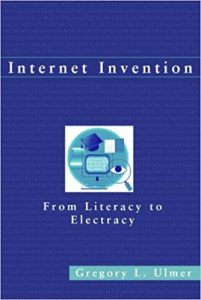 Each one of Ulmer’s books includes an assignment, a project the performance of which draws upon the history and theory argued in the text. The assumption is that the theoretical claims of the argument may be tested and extended (falsified?) through the performance of the project.

Teletheory. Teletheory (1989) introduced the genre of mystory, intended for education in which video is the primary medium. The inspiration came from Hayden White (Metahistory), who asked what might historiography be if it had been invented in the 20th century (indeterminacy in science, surrealism in the arts), rather than in the 19th century (positivist science, realist narrative). Following a trajectory from history through herstory, mystory extrapolates its poetics from 20th-century resources. It concludes with Ulmer’s mystory, “Derrida at the Little Bighorn.” Subsequently mystory was extended in Internet Invention (2003) as the genre enabling students to discover/design their Image of Wide Scope (the point of departure for konsult). The third section of Text Book, 3rd Edition (Scholes, Comley, Ulmer), is devoted to mystory (Barthes) and the signature (Derrida) addressed to lower division undergraduate non-majors. 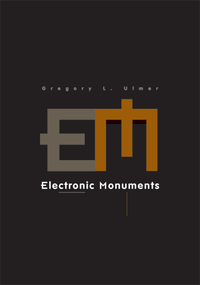 Electronic Monuments   EM (2005) originally was intended to be the concluding section of  Internet Invention (II). II adopts the three-part structure of narrative adventure tale to frame the pedagogy of mystory to compose an Image of Wide Scope (Wide Image). The conceit is that the Wide Image functions for students in the manner of the magic tool acquired by the hero in a classic folktale, earned by undergoing several trials (the popscyle exercises). The assignment in II is to design the Wide Image, which was completed at the end of the second act. Due to considerations of length and complexity, II stopped at the second act, and EM was published separately. In terms of the narrative frame, the assignment in EM is to “confront the Plague (monster, obstacle, opponent)” of the tale, which for konsult is some public policy disaster that triggers student’s sense of injustice. The original assignment was to apply the wide image as the source of an original hypothesis, applied to the configuration of the disaster by means of diagram design. This plan was abandoned so that EM could stand alone, and the emphasis was shifted to the MEmorial, as an electrate alternative to traditional monumentality (and anti-memorial), as support for a new global public sphere emerging as “fifth estate” in digital media. The original plan is revisited in konsult, which undertakes the design of  Wide Image as resource for original hypotheses applied to hyperobject impasses.

Heuretics made explicit the CATTt poetics used to generate mystory in Teletheory. The CATTt was discovered as an analytical device in a seminar on the history of critical theory. Reading in sequence the great discourses on method of the Western tradition from Plato’s Phaedrus to the manifestoes of the avant-garde revealed a pattern. They all innovated on the tradition through a process of Contrast with a previous discourse being rejected; Analogy with an existing practice in a different domain; Theory apprenticeship to a philosophical precedent; Targeting a new discourse in need of a poetics; tale in which to present the new method, at once explanation and demonstration. Heuretics described the CATTt principle and demonstrated it by generating choragraphy: Contrast = Descartes’s Discourse on Method; Analogy = Hollywood Method acting; Theory = Derrida on chora; Target = education via new media; tale = memorial (the poetics is embedded in a narrative account of plans for celebrating the quincentenary of Columbus discovery of America).

The FRE tested choragraphy in a konsult on the Miami River, Miami, Florida. The probe was conducted over several years, 1995-1998. A book based on the experiment was published online, 2012. 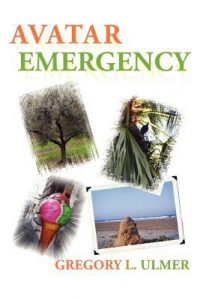 AE concerns Classical Prudence (Phronesis) — good judgment, the capacity to make the right decision spontaneously, intuitively, in the middle of crisis action– updated for Dromosphere (Virilio) conditions of dimension collapse created by Real-Time speed of light feedback loops in digital civilization. Phronesis is mythologized in American values as The Right Man with a Gun (informing the ideology of the National Rifle Association). In Miami Virtue this “fast-draw” myth was countered by the mythology of blues Jazz improv as a model for Real-Time decision. AE takes up this question of the need for cultural practices of instant judgment, drawing on thousands of years of experience documented in the archive with epiphany. AE draws upon this history of revelation in religious and arts practices to formulate flash reason (reasoneon). The assignment running through the book is organized as a remake or adaptation of Titian’s Allegory of Time Governed by Prudence (1565). The painting commemorates an important decision Titian made late in his life. This choice was inspired by seeing Francesco Clemente’s “encounter” with Titian’s Allegory in Smile Now, Cry Later (1998), included in the collection of updates or remakes, Encounters: New Art from Old, Richard Morphet, reporting on an extensive set of such projects by famous artists. The chapters in AE included recurring discussion of my own (mystory) remake of the Allegory respecting an important decision in my life, discovering the relevant allegorical animals after Titian. This theme of flash reason for real-time decision continues in Konsult, in theopraxesis (theoria praxis poiesis integrated within Moment).