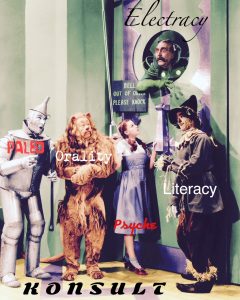 Allegory of Konsult. Plato in Republic condensed his metaphysics of education in the allegory of the cave,  We take this famous story as a relay, prompting us to propose an allegory that dramatizes the equivalent experience of education in electracy. We will explore several possibilities throughout KE, beginning with the film version of The Wizard of Oz, based on the novels by L. Frank Baum. We recall the story of the cave was a round trip: the prisoner released from chains, turned around (converted), led out of the fire-lit cave into the sunlight outside, expected then to return to bring the news of this other world to the cave. This theme of Nostos (round trip, ida y vuelta) structures Homer’s Odyssey, of which Oz is said to be a remake update. A key point in our allegory relative to this tradition is the moment of consulting. Odysseus is prevented from returning home to Ithaca, held in thrall by Circe. Circe relents and tells Odysseus that to learn how to return home he must consult with Tiresias in Hades.

–Apparatus. The allegory helps clarify the difference in metaphysics separating the apparati. Each has a fundamental understanding of reality, and each focuses all its resources to manage the system of cause and effect according to the respective realities. In the oral world of Odysseus, gods represent cause, and humans manage this energy by means of ritual, sacrifice, worship. Odysseus’s behavior gave offense to the gods, thus activating the right-wrong metaphysics of orality. To gain access to Hades, Odysseus performs a ritual sacrifice of oxen, collecting the blood, which attracts the spirits of the dead, including Tiresias, who arrives and counsels the hero about his return home. Socrates as gadfly in the streets of Athens performs a literate consultancy, using dialectical logic questioning interlocutors, according to the true-false reality of literate metaphysics. The Wizard of Oz suggests a third manner of consulting, relative to the reality structuring electracy (Fantasy). 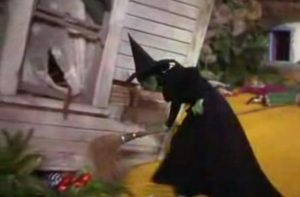 –Scenario. Assuming familiarity with the synopsis of the narrative, we may outline the allegorical import. In general the narrative is instructive of mystorical design in that there is an isotopic rhyming between Dorothy’s world in Kansas and the fantasy world of Oz. The encounter of these two orders is dramatized when Dorothy’s house lands in Oz, crushing the Wicked Witch of the East, whose red shoes Dorothy inherits. The tornado that interrupted a family crisis in Kansas represents Disaster. Dorothy is egent, or soul (psyche) in the allegory, and her journey to find the Wizard to get his advice dramatizes the egent’s actualization of her capabilities in theopraxesis. The three capabilities (virtues, faculties) are represented by the three companions Dorothy meets along the way, the Yellow Brick Road. The three figures embody the significance of the lack articulated in the term “egent” (they lack). The three companions represent the three virtues in a state of privation, Steresis, potentiality not realized (im/potence). Their impotence is a projection of Dorothy’s virtuality, her lack, the condition of any ephebe on the way. The three figures manifest the tripartite system of virtues, but Baum euphemized the assignments somewhat, blending heart and gut. In our appropriation of the story for konsult allegory the alignment with the tradition is clear: Scarecrow wants a brain (Knowledge, Theoria, Head, Rulers); Lion wants courage, so heart (Will, Praxis, Guardians); Tin Woodman’s problem is not his “heart” but his “axe” (enchanted by the witch), which prevents him from loving (having sex). He represents Viscera (Desire, Poiesis, Workers). 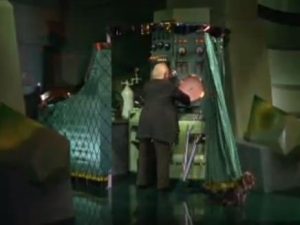 –Wizard. The scene of consultation with the Wizard, when Psyche and her three Capabilities make their requests, shows the full arrangement of apparati and their relationship at the collective level. In this expanded scene, the microcosm/macrocosm individual/collective isotopy is made explicit: Tin Man is Paleo (Family, sexual fertility), Lion is Oral (Church), Scarecrow is Literate (School), Wizard is Electrate (Entertainment). Much theory could be referenced here to support this configuration. To mention Lacan, for example, the Wizard is the Big Other, the one supposed to know, whose hold over us it is the purpose of therapy to dispel. The immediate value of the Oz allegory is to highlight this passage in education, the adventure of learning (dealing with the trials testing Psyche/Dorothy) as actualization of the three capabilities. Equally important is the fact that the Wizard is augmented capability, imagination mise-en-macbine, with the imperative of the allegory being for us to understand how Oz makes able, activates, the three virtues so Dorothy may return home (overcome disaster).