You are here:Home-Uncategorized-TPE: Emblem, Haiku Reason 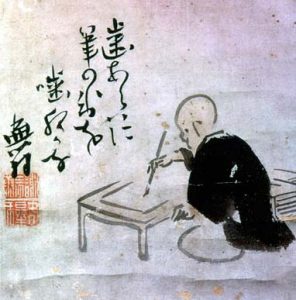 Haiku Reason. Spring Break of 1980 I went to Europe and met Joseph Beuys in Düsseldorf and Jacques Derrida in Paris, protagonists of Applied Grammatology (1985).  The other adopted mentor I wanted to meet, Roland Barthes (inspiration for Teletheory, 1989), was fatally injured in an accident just a few days before I arrived in Paris. On the strength of reading Barthes’s Camera Lucida, published late in his career, in which he theorized image logic by analogy with Japanese haiku poetry, I based my introduction to image thinking in Internet Invention on haiku reason (synonymous with reasoneon). What I didn’t know was that at the time of his accident Barthes had just completed a seminar in which the fall semester was devoted entirely to haiku poetry as a foundation for thinking about imaging in general: The Preparation of the Novel, English, translation published 2011. We will return to late Barthes, whose A Lover’s Discourse: Fragments, is a relay for mystory (in Teletheory). Japonisme in any case played a major role in the invention of modernism in France, a symptom of the syncretism underway throughout the colonial period forming a hybrid of Western and Eastern civilizations, with artists creating the cyberpidgin language made necessary by the trade routes opened by the corporation, the new institution of electracy (East India Company, 1600). In this context, Barthes’s example motivated a closer look at Japonisme in particular and Eastern resources in general.

Roland Barthes’ Empire of Signs not only gives a theory and description of Japan as a haiku civilizatin, each entry (“sign”) is composed using Barthes’ own version of haiku poetics. This style is neither definition nor description in the Western sense of these terms, but “pure designation.” Barthes’ signs are not exactly brief, but they are closely observed “impressions,” staying in the moment, focused on the material signifying details of some feature of the physical world. This style is an excellent relay, useful for prose documentation of the exhibits in each discourse of your mystory. For example, 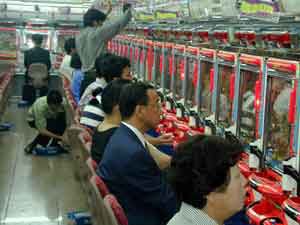 Pachinko
Pachinko is a slot machine. At the counter you buy a little stock of what look like ball bearings; then, in front of the machine (a kind of vertical panel), with one hand you stuff each ball into a hole, while with the other, by turning a flipper, you propel the ball through a series of baffles; if your initial dispatch is just right (neither too strong nor too weak), the propelled ball releases a rain of more balls, which fall into your hand, and you have only to start over again — unless you choose to exchange your winnings for an absurd reward (a candy bar, an orange, a pack of cigarettes). Pachinko parlors are extremely numerous, and always full of a varied clientele (young people, women, students in black tunics, middle-aged men in business suits). It is said that pachinko turnovers are equal (or even superior) to those of all the department stores in Japan (which is certainly saying a good deal)

You need to use prose in each installment of your widesite, as well as graphics. I have used Empire of Signs in my courses as an analogy (it has a hypermedia feel). What Barthes does for the world (“diegesis”) of “Japan” you should do (at least to a degree) for the diegesis of the worlds of your Family memories, Entertainment work, and Community History.