You are here:Home-Uncategorized-Assignment: Avatar Emergency

Avatar Emergency: the book, and the condition. The assignment in AE is to compose/design your Allegory of Prudence, which is extended in KE into Theopraxesis (TPE). AE was included in the CATTt of several seminars documented in Routine. The Allegory is an exercise for egents inventing konsult. 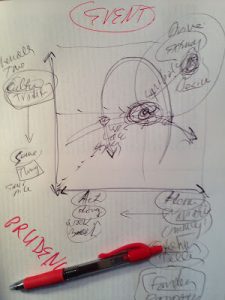 This diagram sketch suggests a way to map the components of the exercise “Allegory of Prudence” onto some conventional dynamics of narrative semiotics:  Roland Barthes’s five semiotic codes (see S/Z’s reading of Balzac’s short story), and a part of Jacques Lacan’s schema of temporality (taken as representative of the trope of metalepsis).

The version of the allegory expressed in Chapter 13 of Avatar Emergency (AE), provides an instance.  The first two codes account for Ulmer walking along the shore of the ocean at Ponte Vedra Beach (Action Code, syntagmatic axis), and encountering a sand castle that he recognizes as built by his granddaughter (Semic code, paradigmatic axis).  This sand castle (prop) is in turn organized by a higher paradigmatic code — the Cultural Code — that is the source of readymade associations accumulated historically and preserved in various documents (the commonplace of tides washing away sand castles, evoking the ephemerality and fragility of human effort).  Meanwhile, the action of the syntagmatic is also organized in turn by a higher code — the Hermeneutic code of enigmas:  actions are arranged to create and sustain interest, to pose engimas and delays of suspense.  This narrative form is supplied in Ulmer’s relay by the story of Damascius, the last diadoch (successor) of the Academy in Athens, and his exile in Persia late in life. 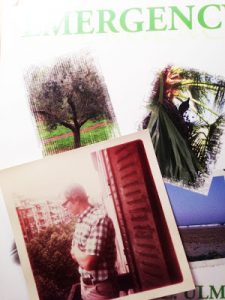 These four codes provide four slots for the allegory:  an action and an underlying narrative (fantasy); a feature of the scene (the prop or seme) and its associated mythology (aura).   The fifth code is the Symbolic (alluding to Lacan’s Symbolic Order), which is the structuring or “anagogical” code of the social and civilizational context of the scene.  This code is reprsented in the diagram by a partial version of one of Lacan’s schemas, showing the temporality of language, and of the unconscious (structured like a language).  The Event alluded to in AE happens in this manner, constructing the time image of prudence.  An initial satisfaction, experienced in infancy, remains latent and potentially present (flashes up at the moment of its recognizability, Benjamin says), triggered by some chance incident (Proust’s involuntary memory). The Symbolic code synthesizes the other four codes, addressing the paradigmatic axis of selection in terms of binary oppositions (male/female, death/life…), and the syntagmatic axis of combination in terms of primary exchanges in the life world– of language, wealth, and kinship. This circuit of remembrance through senation, this triggering of memory and imagination through the activation of somatic markers (Damasio, Neuroaesthetics), is the aesthetic homology to be correlated with mobile media in smart environments, to develop an electrate konsult.