Meanwhile, some reflection on the popcycle diagram, by way of a question, to ask about your experience with the generative power of diagrams. The mise-en-abyme layout is not formally motivated, nor is there any one structure required to register the components.  Derrida’s reference to heraldry was one inspiration, having in mind his ambivalent explorations of abyssal figures, extending not only to modernist tropes, but to the  structure of Plato’s Timaeus and the operations of chora. I referred to it in terms of the fibonacigeometry of the whirling square (in Internet Invention), to call attention to its dynamics, as vortex (Pound). The figure will be unpacked further, since I have used it to think together every four (+1) series and set that presents itself, in the spirit of the four-color theorem: four causes (ancient and modern), suits of cards, divination systems, four (or five) tastes, the cardinal tropes, cardinal and ordinal directions, and more. 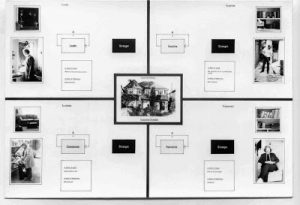 When it comes to the image of wide scope (four or five fundamental images structuring imagination, and central to the history of invention), the prototype is Einstein’s compass (received from his father as a gift at age four or five): the wide image is a compass for the existential positioning system of learning, to orient egents tracking the vector of invention.
Coming across the work of Stephen Willats, I recognized the diagram in Perceptions of a Married Couple (1975), which prompted the thought that I should do a systematic search to trace the diagram conductively. “In ‘Perceptions of a Married Couple’ , the main focus is in the relationship between the form of the inter-personal network that underlies perception of self and others and the resulting generation of social attitudes. It was Willats’ first work where people were photographed within the coded world they themselves had actually constructed.”