The creative individual pursues (or is pursued by) a number of dominant metaphors. These figures are images of wide scope, rich, and susceptible to considerable exploration, exposing the investigator to aspects of phenomena that might otherwise remain invisible to him. Often the key to the individual’s most important innovations inhere in these images. In Darwin’s case, the most fecund metaphor was the branching tree of evolution, on which he could trace the rise and fate of various species. Gruber’s students have uncovered other such metaphors of wide scope. William James had a penchant for viewing mental processes as a stream or river, rather than in terms of the associationist images of a train or a chain. Any consideration of John Locke should focus on his falconer, whose release of a bird symbolized the quest for human knowledge. Finally, in conveying his own emerging view of the creative process, Gruber finds himiself attracted to the Mosaic image of the bush that is always burning but never consumed. (Howard Gardner, Art, Mind, and Brain: A Cognitive Approach to Creativity).

–Memory Glimpse. There are many more examples of memories from early childhood that resonate retrospectively with a career. It is important to note for our Exercise that these early memories do not always present themselves so clearly to the maker as was the case for Einstein or Darwin. The memory may first appear as a glimpse, an intuition, an endocept rather than a concept. The first lesson is just that the way to a pedagogy of creativity passes through childhood experience, involving eventually both memory work, and historical research, as well as some ethnographic field work. All of that comes later. For now it is enough to retrieve a memory and save it in an illustrated anecdote. Here is one more example for now. 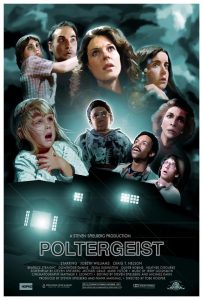 “My parents put me into a fluoroscope, a big, horizontal X-ray machine. My parents were very friendly with the doctor, and he tested his fluoroscope on me.” They laid their toddler down “in the machine, a kind of coffin, and closed the lid on me. It was all green in there, a white-green light. That was one of my earliest and most scary memories. I guess they were looking at my bones. But my point of view was that they put me in a box, and it was all green. And I couldn’t get out. I think that might have been the beginning of ‘Poltergeist’ and ‘Jaws.'” The connection between the light and “Poltergeist” was clear. But how do you get “Jaws” from green light? Spielberg didn’t miss a beat. “Just being abandoned, you know, set adrift, in the middle of the ocean, my ocean of green light.”

Before the green light came another light. “The first thing I remember was the eternal light.” He was only 6 months old at the time and was in a synagogue in Cincinnati, the city where he was born in 1946. “I didn’t know at the time that that’s what it was. I remember seeing people with long beards, handing me crackers. And a red light.” The crackers were called Tamtams, and “the red light was the eternal light, the Ner Tamid,” the light that never goes out. Given all these extraordinary encounters with light — green, red and eternal — it’s no wonder that Spielberg became obsessed with alien abductions. “I’ve been dealing with abduction ever since ‘Close Encounters,'” he said.