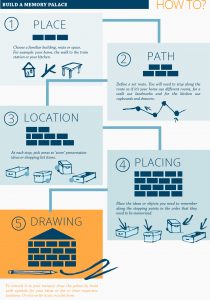 2) Memory Palace. Konsult externalizes and augments mental modeling, including cognitive mapping, the capability of proprioception fundamental to orientation in space and time. A feature of apparatus shift is called innervation (facilitation)–referring to the neurological changes associated with brain/mind adaptation to new technologies. In Phaedrus (the first discourse on method of literacy), Socrates warned his pupil, Phaedrus (who came to his tutorial session with a cheat-sheet up his sleeve of the text he was supposed to memorize) that writing would destroy his memory. Pedagogy in the epoch of manuscript technology involved two interdependent practices: composition of a commonplace book (florilegia), organized by topics (topoi), consisting of methods for generating various genres along with archives of relevant information and resources; memory palace, mnemonic training necessary for memorizing for oral delivery the sermon, lecture, speech for the given occasion. These practices continued up to (and beyond) the era of print, which did finally render memorization obsolete. Students designed and composed a memory palace beginning with fixing in memory an image of a familiar setting, such as their childhood home and environs. On this foundation and primary level, representing their cognitive map, as Kevin Lynch calls the internal model of place and space people form of their locale, students distribute at regular intervals in significant sites a series of strong images drawn from learned and popular culture (Biblical figures, monsters, acts of violence, grotesques), which in turn are associated using poetic devices with the words of the script. Here are versions of three levels of mystory: family home setting; entertainment mythology, community history or career discourse: GPS is the first level of mapping beginning with memory images of a real place, extending into Existential Positioning formed through experience of a popular culture and community history. 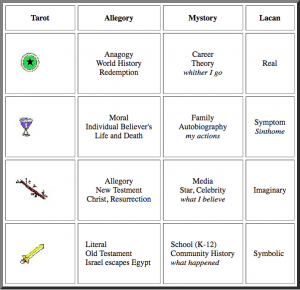 –GPS/EPS. The comparable warning today is that GPS technologies are destroying our capacity for cognitive mapping. The rule is not to lament this loss (it is inevitable) but to accept it as a tradeoff for the augmented power of navigation (way-finding) in cyberspace. Orientation thus is a central concern of konsult, with mystory as a retrieval and updating of the obsoleted (McLuhan) practices of manuscript pedagogy (to be discussed in detail through KE). Orientation is augmented in electrate konsult just as reasoning is augmented in literate dialogue. Fredric Jameson observed that the alienation of modern experience was due to this loss of EPS that was enjoyed by premodern people. In the Greco-Roman, Judeo-Christian syncretism organizing Western civilization up to modernity (now being modified by further syncretism via post-colonial encounters into a global hybrid), there were four levels of meaning, in an allegorical system codified by Dante relative to the Divine Comedy. Individual believers oriented themselves (Moral position) relative to the larger allegorical pattern based on the Bible: Literal level = Old Testament, Israel coming out of captivity in Egypt; Allegorical level = life of Jesus, resurrection; Moral level (the believer’s striving against sin); Anagogical level = Theological cosmology, destiny of humanity within history, salvation. Jameson calls for a new cosmology or allegorical practice relevant to contemporary metaphysics (electracy) that restores this ability to read across the micro-macrocosm gap. Mystory does precisely this by mapping one’s position within the popcycle, and putting the pattern of repetition generated via the fourfold allegorical reading into a wide image, based on egents’s contemporary world. 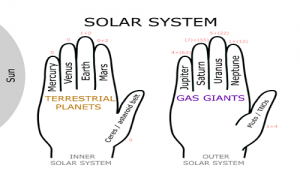