A stunted Tatar with a red headcloth.  W. G. Sebald adds to our archive of popcycle exemplars, manifesting all the features of the genre we are learning: four levels of discourse; wide-image memory; cosmic scene glimpsed through a quotidian window. Some variation of popcycle structure recurs in most of Sebald’s novels. Vertigo, for example: “A book in four parts. The opening section is devoted to Stendhal’s memories of joining Napoleon’s army as a very young man, just when it invaded Italy. the second section centers on Casanova’s horrible imprisonment in Venice. The third part follows Kafka’s tribulations in Italy; and the fourth part chronicles Sebald’s own return to his childhood home in a small Bavarian village.” 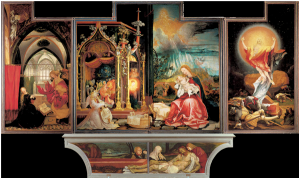 –After Nature. The work assigned in seminar, however, is After Nature.  There are three worlds juxtaposed in this case, characterized as a triptych. The structure is thematized in the first section, about the sixteenth-century painter Matthias Grünewald, creator of perhaps the most famous triptych in art, the Isenheim Altarpiece. The second section is on the nineteenth-century botanist George Steller, and his journey into the Arctic with the expedition of Vitus Bering. The final section is an autobiographical prose poem. This section begins with testimony regarding the truth of a wide image, characterized as a memory fossil. “For it is hard to discover the winged vertebrates of prehistory embedded in tablets of slate. But if I see before me th nervature of past life in one image, I always think that this has something to with truth” (Sebald, 83). Then follows the scene of his existential epiphany (primal scene). 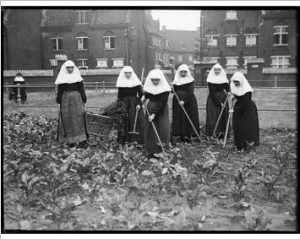 I grew up, despite the dreadful course of events elsewhere, on the northern edge of the Alps, so it seems to me now, without any idea of destruction. But the habit of often falling down in the street and often sitting with bandaged hands by the open window between the potted fuchsias, waiting for the pain to subside and for hours doing nothing but looking out, early on induced me to imagine a silent catastrophe that occurs almost unperceived. What I thought at the time, while gazing down into the herb garden in which the nuns under their white starched hoods moved so slowly between the beds as though a moment ago they had still been caterpillars, this I have never got over. The emblem for me  of the scarcely identifiable disaster since that time has been a stunted Tatar with a red headcloth and a white slightly curved feather. In anthropology this figure is often associated with certain forms of self-mutilation and described as that of the adept who ascends a snow-covered mountain and long tarries there, as they say, in tears. (Sebald, After Nature, 89-90).

It is worth noting, for future reference, the figure of “whiteness” in all three worlds, this motif opening passage between the quotidian and metaphysical levels of the experience. The white hoods of the nuns links with whiteness in the Isenheim Altarpiece, the central panel’s vision of the future, “a planet utterly strange, chalk-colored behind the blackish-blue river. Here in an evil state of erosion and desolation the heritage of the ruining of life that in the end will consume even the stones has been depicted. In view of this it seems to me that the ice age, the glaringly white towering of the summits in the upper realm of the Temptation is the construction of a metaphysics.” (31). This ice scene becomes literal in the second history, of Bering’s ill-fated search for a Northwest passage.